Along with Bondi Beach in Sydney, Surfers Paradise is one of the best and most famous beaches in Australia.

Located in the heart of Queensland’s Gold Coast, ‘Surfers’ as it is colloquially known as is a world class tourist and entertainment destination which welcomes, on average, about 20,000 visitors a day.

The best known and busiest beach on the Gold Coast, Surfers Paradise is known for its golden sand, iconic skyscrapers and beach lifestyle.

Ironically, despite its name, Surfers Paradise is actually a lot more popular with visitors who come more to sunbath, chill out, relax and exercise, rather than surf.

The history of how Surfers Paradise became the popular Australian beach and tourist destination it is today is a very interesting one.

The first European to settle in the area was a farmer called James Beattie. Around the 1870s he staked out an 80-acre (32 ha) farm on the northern bank of the Nerang River. An area close to what is now Cavill Avenue.

With the farm failing to generate consistent profit, he sold it to a German immigrant called Johan Meyer in 1877. He turned the land into a sugar farm and mill.

However, this venture was also unsuccessful, as the sandy soil was not conducive to growing crops. So within a decade he too sold the farm to concentrate on providing access to tourists wanting to visit the beach area.

He set up Meyer’s Ferry, which operated from 1880 to 1928. Transporting passengers and vehicles operated across the Nerang River.

In addition, as well as operating a horse-and-buggy service from the Southport railway station to the beach, he also the Main Beach Hotel.

By 1889, this hotel was designated a post receiving office. Subdivisions were created around it under the official place name of Elston. So named, by the Southport postmaster, after his English wife’s hometown of Southport in Lancashire.

When Meyer died in 1901 the Main Beach Hotel’s licence lapsed. Rendering Elston as a tourist town without a hotel or post office for a period of 16 years.

In 1917, a land auction was held by the Brisbane real estate company Arthur Blackwood. They sold off subdivided blocks in Elston as the ‘Surfers’ Paradise Estate’. The auction failed subsequently on account of beach access being difficult.

However, this is generally accepted as being was the first recorded reference to the name Surfers Paradise.

By 1921 the beach at what is now Surfers was busy enough to warrant the placing of the lifesaving reel on it. Three years later in 1924 the present-day Surfers Paradise Surf Life Saving Club was founded there.

In 1925, after the Jubilee Bridge opened and the South Coast Road was extended, Elston began to get more visitors.

As it was no longer cut off by the river, entrepreneurs and businessmen began buying land and developing property around Elston and further south at Burleigh Heads. Pretty soon a number of hotels began to open to accommodate tourists to the Gold Coast.

By opening this hotel and a neighbouring zoo, Cavill created the suburb’s first attraction. As it was located between the ferry jetty and the picturesque surf beach off the South Coast Road, it quickly became popular. Pretty soon shops, restaurants and supporting services opened up around it.

On 1 December 1933, after a concerted push by Cavill, the name Elston was officially changed to Surfers Paradise – after the local council decided the name was more marketable.

A development boom hit in the 1950s and 1960s. The first highrise in Surfers Paradise was erected in 1959 and was named the Kinkabool. It stood 10 stories high and still stands to this day in Hanlan Street.
Other iconic buildings included the Iluka, St Tropez and also The Pink Poodle.

Part of a 16 km stretch of stunning beach coastline, Surfers Paradise consists of 2km of golden sand and rolling pacific ocean surf. It is patrolled by three lifeguard towers. All of which keep look out over designated swimming and surfing areas.

The beach itself is fronted to the east by the Surfers Paradise Foreshore. A redeveloped public space, completed in 2011 that features contemporary coastal streetscaping of verdant foliage, pretty wildflowers and about 95 pandanus trees.

From this foreshore there is plenty of parking and signed access tracks from the esplanade directly down to the sand. As well as plenty of seating areas and barbecue facilities that afford ocean views too.

The Esplanade and the area around it features the most highly developed section of the Australian coast. Numerous highrise hotels and buildings tower over it.

Containing a wide expanse of sand, there are plenty of things to do on Surfers Paradise Beach. These include the following:

Given that there are three patrolled lifeguard towers along the 2km stretch of beach this should tell you that Surfer’s Paradise is a potentially hazardous beach to swim on.

Whilst thousands of people do it every day without issue, it is important to be aware that rips are present whenever waves are breaking and deep rip channels may run out from the shoreline.

ALWAYS swim between the flags, don’t swim too far out and avoid the rip holes and outer trough.

While beach breaks extend the full length of the beach, surf conditions tend to be best on the outer bar. Here you’ll find plenty of experienced surfers enjoying a moderate swell and offshore winds.

The Nerang entrance wall can produce some of the best quality bars and breaks in the area.

You may be interested to note there are plans in the pipeline for Queensland’s first surfing reef on the beach at Narrow Neck.

Beach fishing is a very popular along the entire length of beach at Surfers.

Conditions are best when there are rips across the inner bar. With the Nerang jetty and entrance wall being among the most popular spots to fish the channel or surf.

At any given time there are a whole raft of water activities including jet skiing, wake boarding, canoeing and paddle boarding that take place along the ocean.

Surfers Paradise is also an excellent beach to walk on against a backdrop of the magnificent views.

Much like the city of Surfers Paradise itself, the beach is aimed mainly towards the international, tourist, and ‘young adult’ crowds.

There are hundreds of bars, restaurants, clubs and retail shops that target them. Many of these are within 100 metres of the main beach.

You certainly won’t go hungry. Everything from Thai to Indian, Brazilian to Persian is available in Surfers. Likewise there are plenty of bars and coffee shops too.

As a general rule, the area of in the eastern part of Surfers Paradise Boulevard towards the beach tends to house family-friendly attractions. These include Time Zone, Ripley’s Believe it or Not museum and Adrenalin Park.

By contrast most of the nightclubs and adult entertainment tend to be located in the western part of the suburb.

It also hosts a range of artistic, cultural and community events throughout its precinct.

The Surfers Paradise Beachfront Markets operate every Friday and Saturday night between 4pm and 9pm.

In addition the masterplanned space hosts a full calendar of free public events. These include the Surfers Paradise Festival and the Australian Sand Sculpting Championships.

For more information on these events at Surfers Paradise check out Destination Gold Coast. 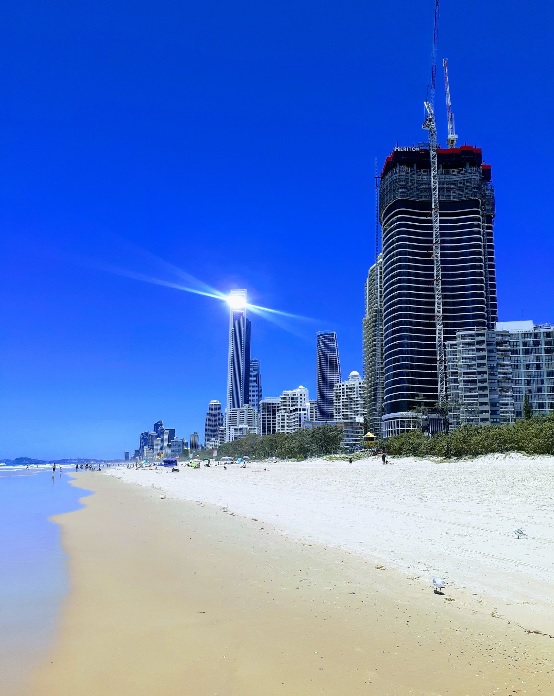 These maids were dressed in gold lamé bikinis and a tiara and were hired by Elsey to top up expired parking meters with coins.

While meter feeding was against the law, the local council decided to ignore the offence due to the good publicity these maids attracted. Infact so popular did they become that in 1967 Gold Coast Mayor Bruce Small used them in his promotion of the city.

Today the meter maids wear a gold lycra bikini and an Akubra hat. Some also wear a sash with the words “Surfers Paradise Meter Maids” emblazoned on it.

As parking meters are now all cashless the role of the Meter Maids has changed to one of assisting visitors and participating in tourism events.

The Gold Coast is synonymous with Schoolies and during the last week of November and first week of December there is no getting away from it.

This tradition of Schoolies Week began on the Gold Coast in the early 1980s. The event is often seen as a rite of passage for graduating students. The final transitional period from youth to adulthood.

Surfers Paradise still accommodates the largest single venue for the event. Every year an estimated 40,000 teenagers travel to the Gold Coast for it.

Despite its negative perceptions amongst some, official Schoolies events on the Gold Coast are considered very safe.

A dedicated Schoolies event zone, which features live music and youth-themed activities, is established each year on Surfers Paradise Beach to provide a safe, fun environment for school leavers.

These are drug-free and alcohol-free events. The area is also monitored for the exclusive use of current Year 12 school leavers.

Recharge Zones are also located close to the Schoolies Hub. These provide a safe place to keep hydrated with free water available.

There is a whole host of hotel and accommodation providers to suit all budgets and tastes.

Prices and availability vary depending on whether it is high, medium or low season.

Public Holidays like Christmas and New Year, as well as Easter and school holidays are seen as high season. As is Schoolies week too.

During these times hotels often operate at maximum capacity.

If you are wanting to book a hotel at Surfer’s Paradise please check out some of the best available rates below.