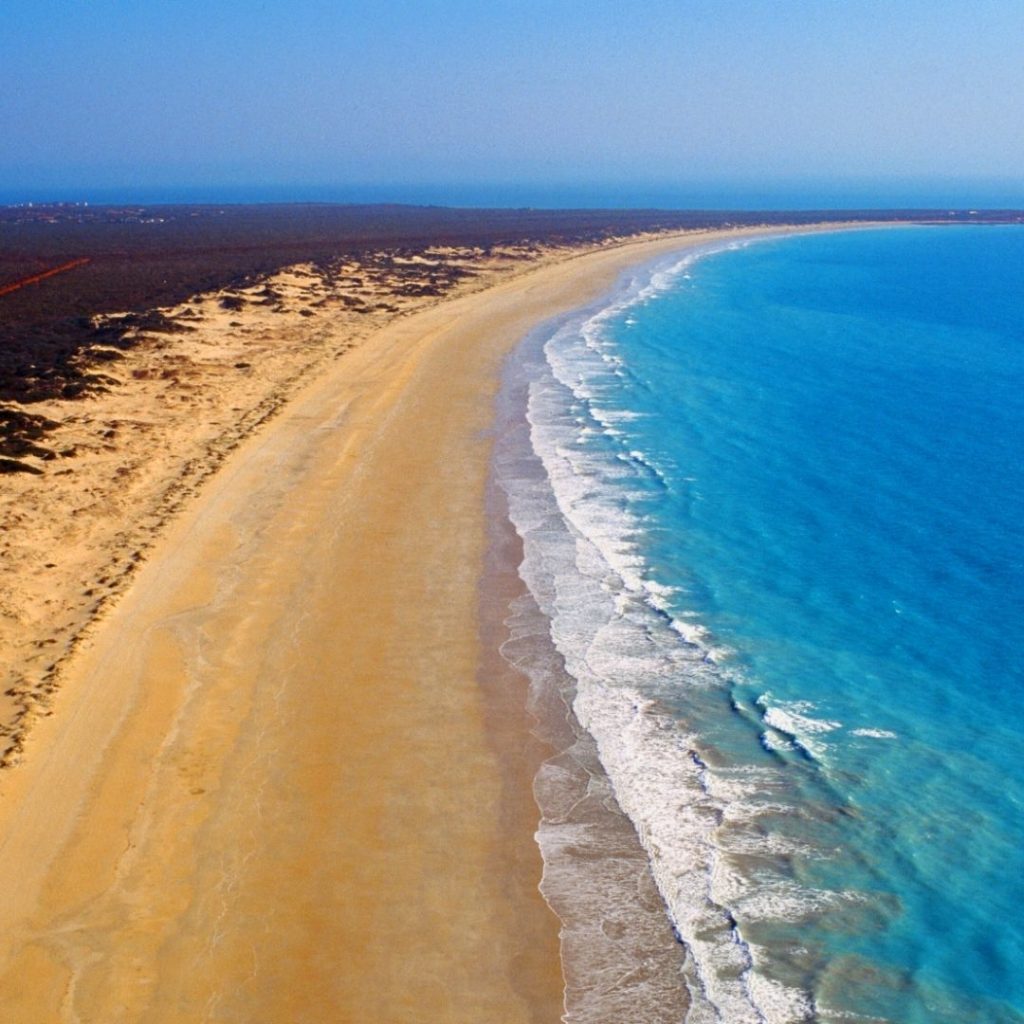 Cable Beach is one of the most famous beaches not just in Australia but also the world.

Located in Broome, towards the top of Western Australia, the list of superlatives to describe it is almost endless. Beautiful, picturesque, stunning, serene – they all apply here and more.

If Cable Beach is not near the top of your beach bucketlist then it certainly should be!

A 22km oasis of white sandy beach flanked by low cliffs of red ochre on one side and the eastern Indian Ocean on the other, Cable Beach has appeared in numerous tourist videos and campaigns over the years.

So even if you don’t recall the name instantly, the chances are you have seen it before.

Named after the telegraph cable which was laid between Broome and Java in Indonesia back in 1889, – which connected Australia’s North West with the world – Cable Beach is both the name of the beach and the name of the surrounding suburb in Broome.

Notable as a very flat, wide, pristine and uncrowded beach, it is definitely the place to come if you want to get away from it all.

Bounded by sand dunes and ochre red cliffs, Cable Beach remains pretty much as nature created it – albeit with the convenience of resorts and caravan parks close by.

With month upon month of warm, perfect weather, there is no better place to enjoy a beach day or holiday.

Located some 1684km from Perth (2219km in road distance) Cable Beach draws visitors from around the world. Attracted to its vast expanse of pristine white sand, stunning red cliffs, the alluring turquoise water of the Indian Ocean and its year round warm weather.

The beach is about a 10 minute drive from Broome. It is pretty much untouched from how nature created it

Starting on the north side of Gantheaume Point, the beach initially faces north, before swinging round to trend due north for 6 km. Until it reaches the scattered sandstone rocks that separate it from the northern beach.

The beach receives waves averaging about one metre. These are higher when summer westerlies blow. They are also higher at high tide too. But they decrease markedly at low tide owing to the shallow seabed off the beach.

At the extreme southern end of the beach is Gantheaume Point. The impressive lighthouse here is a great spot to observe dolphins and whales during the migration season.

Furthermore, dinosaur footprints that are estimated to be at least 130 million years old can be seen in the rocks at low tide.

Minyirr Park is a coastal reserve located adjacent to the southern section of the beach. It serves to protect the traditional land of the Yawuru people. But it does have walking trails that traverse the area behind the red ochre dunes.

Here, three colour coded trails wind their way through this coastal area. Heading to the ocean, through the bush and the dunes, this is a gorgeous area to walk in the early morning or late afternoon. The views along Cable Beach are especially stunning from here.

Towards the very north of the beach lies one of Australia’s most famous sections of nudist beach. The clothes-optional area continues from the beach access road from the car park to the mouth of Willie Creek, some 17 km away.

In areas at the northern part of the beach Broome’s world-famous camel rides take place around sunrise and sunset hours, just past the ‘rocks’ section.

Perched high astride a camel, as it rhythmically walks in unison with the camel train is not only a wonderful experience. It also gives you a different perspective of this stunning location too.

Four-wheel drive vehicles are also permitted north of these rocks. At low tide this allows people to explore the beach more than would otherwise be possible on foot.

Access is via the vehicle ramp at Cable Beach Road West. From here cars must make their way past the rocks to the northern part of the beach.

Please note: if you have a hire car, be sure to check the conditions of hire. Many companies do not allow their cars to drive on the beach.

Regardless of whether you own the car or not, if you are planning to drive on the beach it is very important to be aware of the tide times.

Failure to do so could leave you in hot water! (Well ocean water. But you get what we mean 😊).

Between October and February, Turtles nest on Cable Beach. During this time there are some restrictions imposed on beach driving.

Cable Beach offers sensational sunsets. These tend to occur between 5pm and 7.15pm depending on what time of the year you visit.

Colours range from purples and golds to fiery reds. The skies illuminate magically as the sun slowly sinks into the ocean.

This affords sensational photo opportunities. As well as the chance to sit with a coffee and take in a true marvel of nature.

The best time to visit Cable Beach, and also Broome, in terms of weather, is between April to November. The cheapest time however is during the wet season. Where you can pick up some really cheap deals on flights and accommodation.

However, its not called the wet season for nothing as torrential rain can persist. So just be mindful of that when planning a visit.

If you are able to travel early in the peak season between March and April you should find a happy balance between good price and good weather.

Peak season is May to October. However, during this time you should have no trouble finding a quiet patch of beach to plonk yourself on.

Broome has huge tidal movements and visiting the beach at low tide will generally provide you with a larger expanse of sandy beach to enjoy.

For swimming, waves are mostly gentle in the dry season from May to October.

Cable Beach is a very active beach in the sense that you can go swimming, snorkelling, kayaking, surfing (when the swell is up), running, walking and lots more similar activities.

The best time to swim is either side of high tide.

The surf at Cable Beach is better at the exposed beach to the north. While it is usually one metre or less it can reach around two metres with westerly winds, and even higher during tropical cyclones.

Again, be aware of the tides. The size and location of the breaking waves will change considerably between high and low tide.

There are quite a few decent fishing spots around too. You’ll quickly be able to establish when these are when you get there.

In Broome, and closer to the beach, you can easily hire chairs, umbrellas, paddle boards and bicycles for your day’s activities at Cable Beach.

Boat cruises operate around the area and you can go sailing too.

In addition, the beach and the Cable Beach Amphitheatre plays host to a number of events throughout the year. These include the Shinju Matsuri Long Table Dinner, concerts and also Cable Beach Polo.

You will find toilets, showers and also change facilities located by the car park and main entrance at Cable Beach Road West.

Broome is less than a 10-15 minute drive from the beach. Here you can hire a car, catch a taxi, or catch the bus.

Throughout Broome and dotted along the coastline are the cafés and restaurants, car parks, coach parking, picnic areas, public toilets.

Between November and April, Box jellyfish (also known as stingers) may be present. Caution is required when swimming during this period. Wearing lycra swimming suits are highly advisable.

Always check the warning signs and liaise with the lifeguards if there are any present. Lifeguards tend to only be on duty at the beach from May to October. When they are there, always swim between the flags.

On two separate occasions over the years there have been cases where crocodiles have been sighted off the shore.

Whilst this is an extremely rare occurrence, preventative measures, and restricted beach access would be put in place should any more be seen.

There are regular flights direct from Perth, Melbourne and Sydney all year round to Broome. Also there are connecting flights from all other Australian capital cities via these destinations.

There are a wide range of accommodation providers in Broome and near Cable Beach to cater to all tastes and budgets.

You can check out a full list of them here.

10 Glorious Goa Beach Hotels To Shortlist For Your Next Holiday

Australians are rightly very proud of the 10,000 b

When you are stuck in the office, chained to your

Santa Monica Beach is one of the most famous of al